Several years ago two good friends in our church, Neville and Helen,  commissioned me to re-create a full-size copy of a Bible Prophecy Chart used by Harry King, a respected Bible teacher and authority on Bible Prophecy. I ordered a roll of good quality Belgian linen canvas and working from some photographs I’d taken of Harry’s chart many years ago, when I accompanied him during a series of special meetings he held at Myrtle Hall – the meeting place of the Church of God in Lerwick, Shetland – I painted a new version of the chart.

At the time of the commission, Neville and Helen were seriously considering a house move to a small Castle built in the Baronial style. It had a huge dining room and their plan if the property became theirs, was to hang my painting like a tapestry on the wall. Unfortunately the deal didn’t materialise and the chart remained rolled up except for an occasional outing when Neville gave a presentation on the subject of Bible Prophecy.

A few years back, Helen died. Last year, Neville was clearing things out and generously decided to return the chart to me as a gift. I was very grateful, put the chart away and thought no more about it until Neville phoned me just at the start of ‘the lockdown’ with an idea. (Now, I should say, when Neville has an ‘idea’ – it usually involves a considerable amount of work for someone else – in this case, me! Neville is a past master in the art of delegation.) For six months we collaborated on a book featuring coloured photo’s of the chart. To cut a LONG story short, I designed and laid out the book including cover, allocated an ISBN number and uploaded the files to Ingram, Amazon and Apple Books. We launched the book last month. 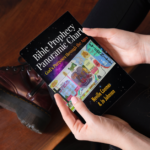 Check out the following links to find out more: